This post is part of our Introduction to Machine Learning course at Code Heroku.

Wondered how Google comes up with movies that are similar to the ones you like? After reading this post you will be able to build one such recommendation system for yourself.

It turns out that there are (mostly) three ways to build a recommendation engine:

Now you might be thinking “That’s interesting. But, what are the differences between these recommendation engines?”. Let me help you out with that.

Perhaps, this is the simplest kind of recommendation engine that you will come across. The trending list you see in YouTube or Netflix is based on this algorithm. It keeps a track of view counts for each movie/video and then lists movies based on views in descending order(highest view count to lowest view count). Pretty simple but, effective. Right?

This type of recommendation systems, takes in a movie that a user currently likes as input. Then it analyzes the contents (storyline, genre, cast, director etc.) of the movie to find out other movies which have similar content. Then it ranks similar movies according to their similarity scores and recommends the most relevant movies to the user.

This algorithm at first tries to find similar users based on their activities and preferences (for example, both the users watch same type of movies or movies directed by the same director). Now, between these users(say, A and B) if user A has seen a movie that user B has not seen yet, then that movie gets recommended to user B and vice-versa. In other words, the recommendations get filtered based on the collaboration between similar user’s preferences (thus, the name “Collaborative Filtering”). One typical application of this algorithm can be seen in the Amazon e-commerce platform, where you get to see the “Customers who viewed this item also viewed” and “Customers who bought this item also bought” list. 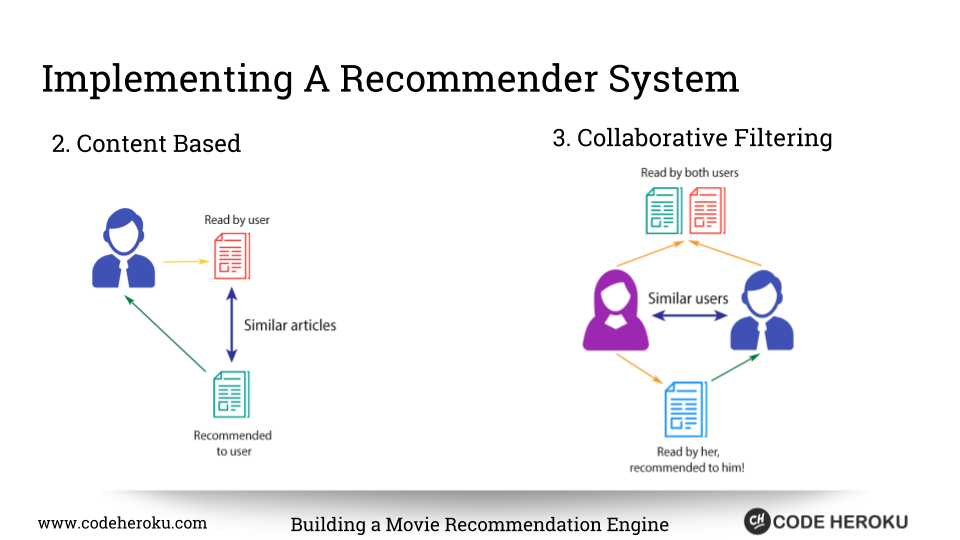 In this article, we are going to implement a Content based recommendation system using the scikit-learn library.

Let us start with something simple and easy to understand.

Suppose, you are given the following two texts:

How would you find the similarity between Text A and Text B?

Now, what will happen if we try to represent these two texts in a 2D plane (with “London” in X axis and “Paris” in Y axis)? Let’s try to do this. 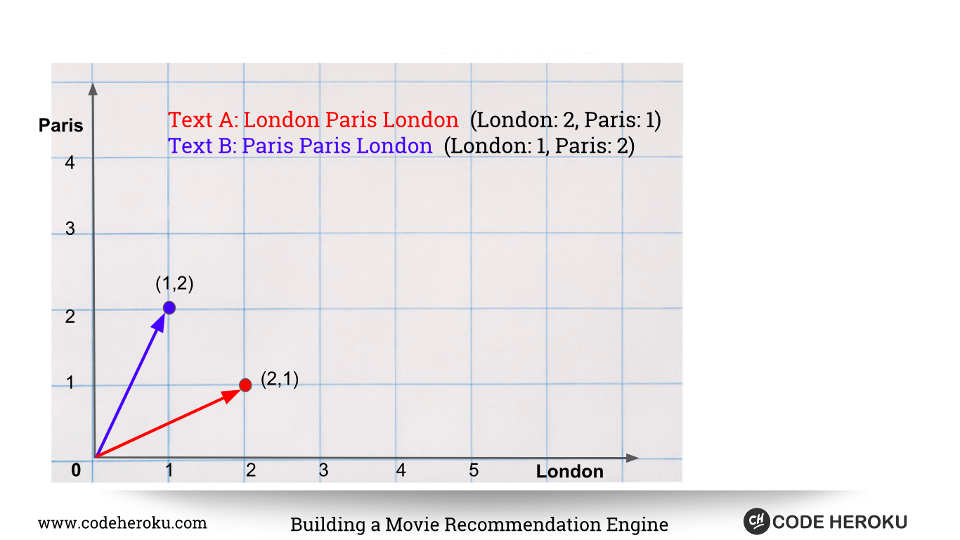 These two texts are represented as vectors. Right? So, we can say that two vectors are similar if the distance between them is small. By distance, we mean the angular distance between two vectors, which is represented by θ (theta). By thinking further from the machine learning perspective, we can understand that the value of cos θ makes more sense to us rather than the value of θ (theta) because, the cosine(or “cos”) function will map the value of θ in the first quadrant between 0 to 1 (Remember? cos 90° = 0 and cos 0° = 1 ).

And from high school maths, we can remember that there is actually a formula for finding out cos θ between two vectors. See the picture below- 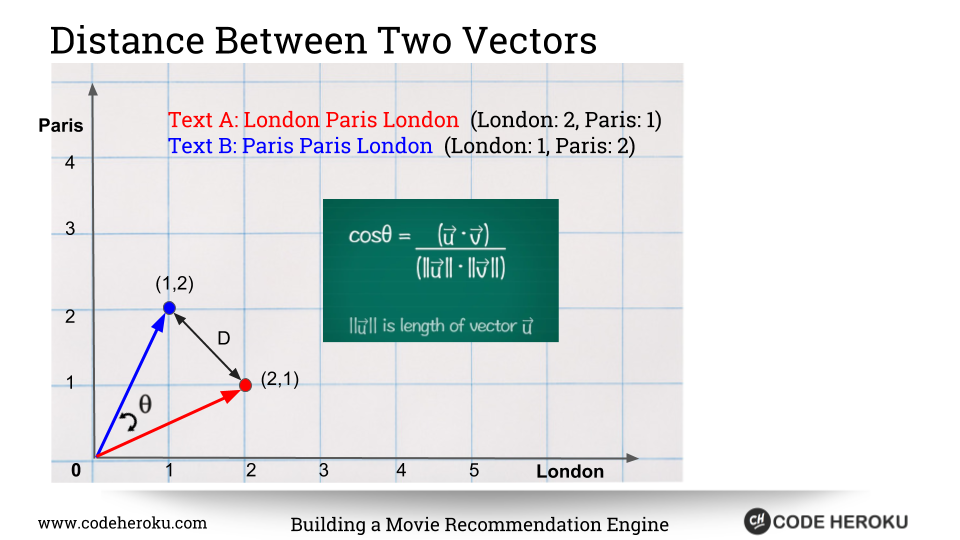 Don’t get scared, we don’t need to implement the formula from scratch for finding out cos θ. We have our friend Scikit Learn to calculate that for us :)

Let’s see how we can do that.

At first, we need to have text A and B in our program:

Now, we need to find a way to represent these texts as vectors. The CountVectorizer() class from sklearn.feature_extraction.text library can do this for us. We need to import this library before we can create a new CountVectorizer() object.

count_matrix gives us a sparse matrix. To make it in human readable form, we need to apply toarrray() method over it. And before printing out this count_matrix, let us first print out the feature list(or, word list), which have been fed to our CountVectorizer() object.

The output of the above code will look like this-

Now, we need to find cosine(or “cos”) similarity between these vectors to find out how similar they are from each other. We can calculate this using cosine_similarity() function from sklearn.metrics.pairwise library.

The above code will output a similarity matrix, which looks like this-

What does this output indicate?

Now we know how to find similarity between contents. So, let’s try to apply this knowledge to build a content based movie recommendation engine.

The movie dataset that we are going to use in our recommendation engine can be downloaded from Course Github Repo.

After downloading the dataset, we need to import all the required libraries and then read the csv file using read_csv() method.

If you visualize the dataset, you will see that it has many extra info about a movie. We don’t need all of them. So, we choose keywords, cast, genres and director column to use as our feature set(the so called “content” of the movie).

Our next task is to create a function for combining the values of these columns into a single string.

Now, we need to call this function over each row of our dataframe. But, before doing that, we need to clean and preprocess the data for our use. We will fill all the NaN values with blank string in the dataframe.

Now that we have obtained the combined strings, we can now feed these strings to a CountVectorizer() object for getting the count matrix.

At this point, 60% work is done. Now, we need to obtain the cosine similarity matrix from the count matrix.

Now, we will define two helper functions to get movie title from movie index and vice-versa.

Now comes the most vital point. We will sort the list similar_moviesaccording to similarity scores in descending order. Since the most similar movie to a given movie will be itself, we will discard the first element after sorting the movies.

Now, we will run a loop to print first 5 entries from sorted_similar_movieslist.

And we are done here!

You can download the Python script and associated datasets from Course Github Repo.

So, the whole combined code of our movie recommendation engine is:

Now, it’s time to run our code and see the output. If you run the above code, you will see this output-

After seeing the output, I went one step further to compare it to other recommendation engines.

So, I searched Google for similar movies to “Avatar” and here is what I got-

That’s all for now. Stay tuned for the next article :)

You can download the Python script and associated datasets from Course Github Repo.