“Torture the data, and it will confess to anything.”

If you are someone who is familiar with data science, I can confidently say that you must have realized the power of the above statement.

With proper utilization of data, even ruling the entire world is possible.

But, having raw, unprocessed data is meaningless unless you analyze it to get significant insights.

Exploratory Data Analysis (EDA) is the process of visualizing and analyzing data to extract significant insights from it. In other words, EDA is the process of summarizing main characteristics of data in order to gain better understanding of the dataset.

In this article, we are going to introduce you to the process of EDA through the analysis of the automobile dataset available here. We will talk about some common methods used for EDA and will let you know how to apply them for extracting meaningful insights from raw data.

Here is a quick overview of the things that you are going to learn in this article:

At first, you need to download the automobile dataset from this link.

Descriptive statistics analysis helps to describe the basic features of dataset and obtain a brief summary of the data.

The describe() method in Pandas library helps us to have a brief summary of the dataset. It automatically calculates basic statistics for all numerical variables excluding NaN (we will come to this part later) values.

Let’s import all the libraries and read the data.

We can check if the data is successfully imported by displaying the first 5 rows of dataframe using head() method.

Now, let’s apply the describe() method over this dataset and see the results. It displays a description of mean, standard deviation, quartiles and maximum & minimum values.

It helps us to have a brief overview of the data. For example, by seeing the mean of “diesel” and “gas” column, we can say that 90% of the engines run on gas while almost 10% engines run on diesel.

Let’s see an example of this:

The above output tells us that our dataset has 115 cars with four doors and 86 cars with two doors. 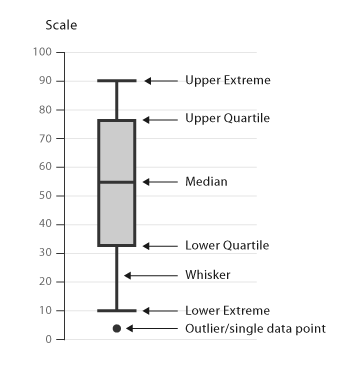 For example, the following code shows us the distribution of price for cars with different number of cylinders. 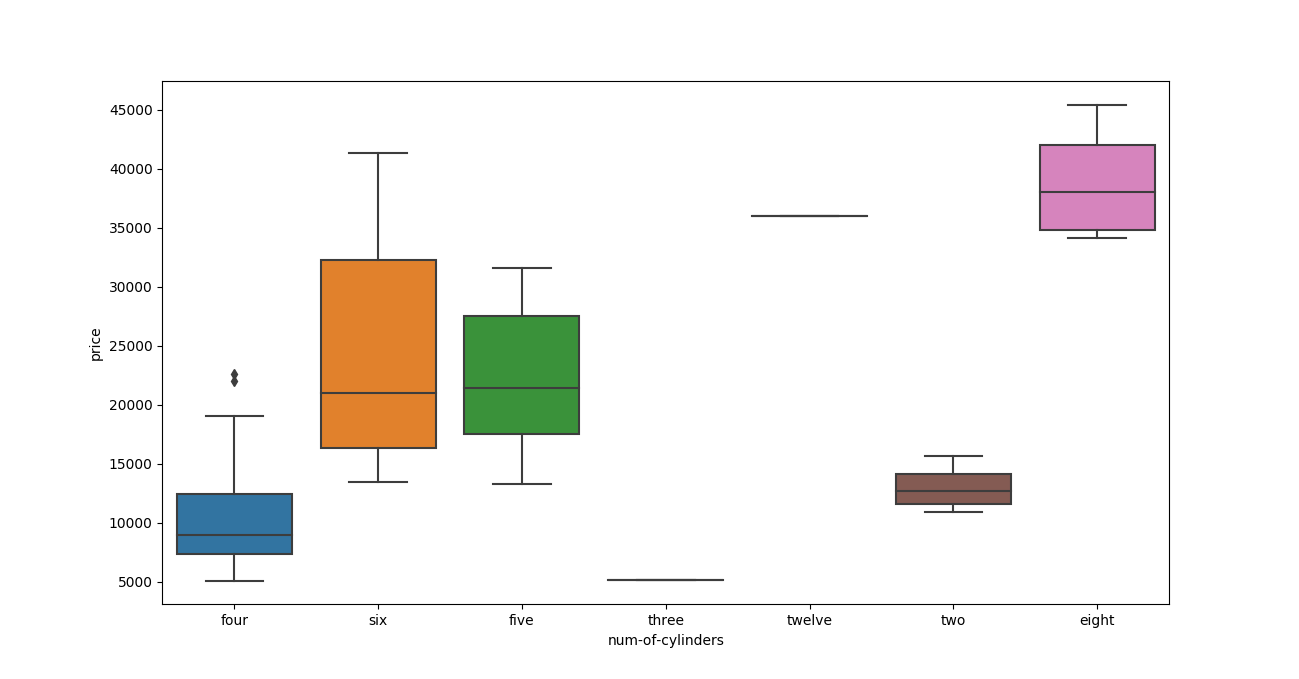 A great way to visualize this relationship would be to use a scatter plot. Scatter plots represent each relationship between two continuous variables as individual data point in a 2D graph. 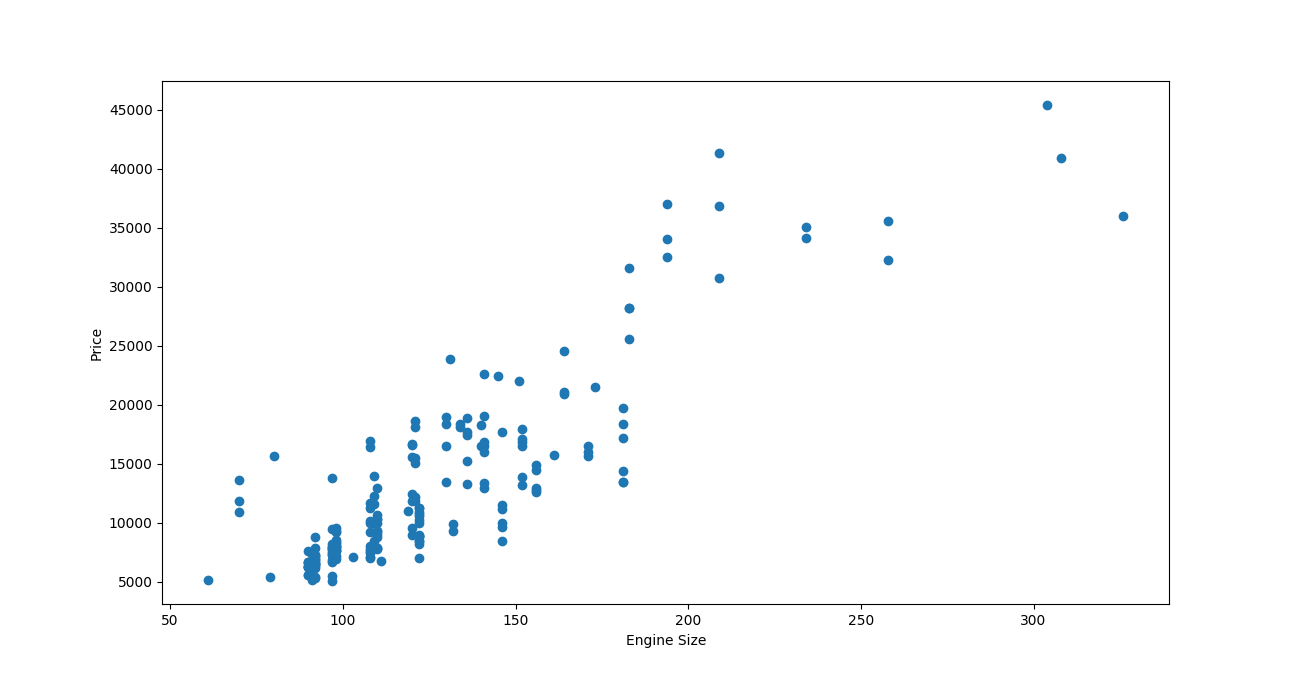 From the above output, we can interpret that there is a linear relationship between engine size and price. Cars with bigger engines might be costlier than the cars with small-sized engines. This thing totally makes sense, right?

Let’s see an example of this. We will see the distribution of “peak-rpm” using histogram. 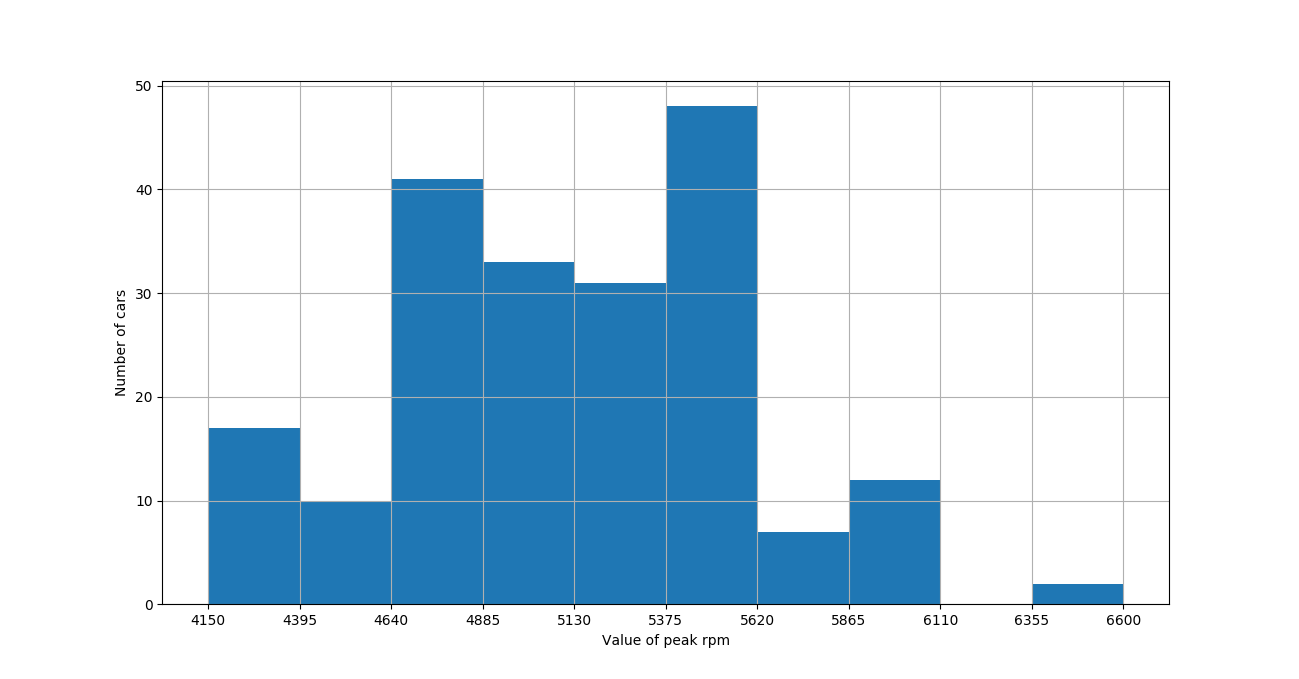 Assume that you want to know the average price of different types of vehicles and observe how they differ according to body styles and number of doors. A nice way to do this would be to group the data according to “body-style” and “num-of-doors” and then see the average price across each category. The groupby() method from Pandas library helps us to accomplish this task.

The above output tells us that two door hardtop and two door convertibles are the most expensive cars, whereas, four door hatchbacks are the cheapest.

A table of this form is not very easy to read. So, we can convert this table to a pivot table using the pivot() method, which would allow us to read this table in a better fashion.

The price data now becomes a rectangular grid, which is easier to visualize.

When no data value is stored for a feature in a particular observation, we say this feature has missing values. Examining this is important because when some of your data is missing, it can lead to weak or biased analysis.

As you can see, analyzing a grid of this style to detect missing value is not very convenient, so we will use heatmaps to visually detect these missing values.

Heatmap takes a rectangular data grid as input and then assigns a color intensity to each data cell based on the data value of the cell. This is a great way to get visual clues about the data.

We will generate a heatmap of the output of isnull() in order to detect missing values. 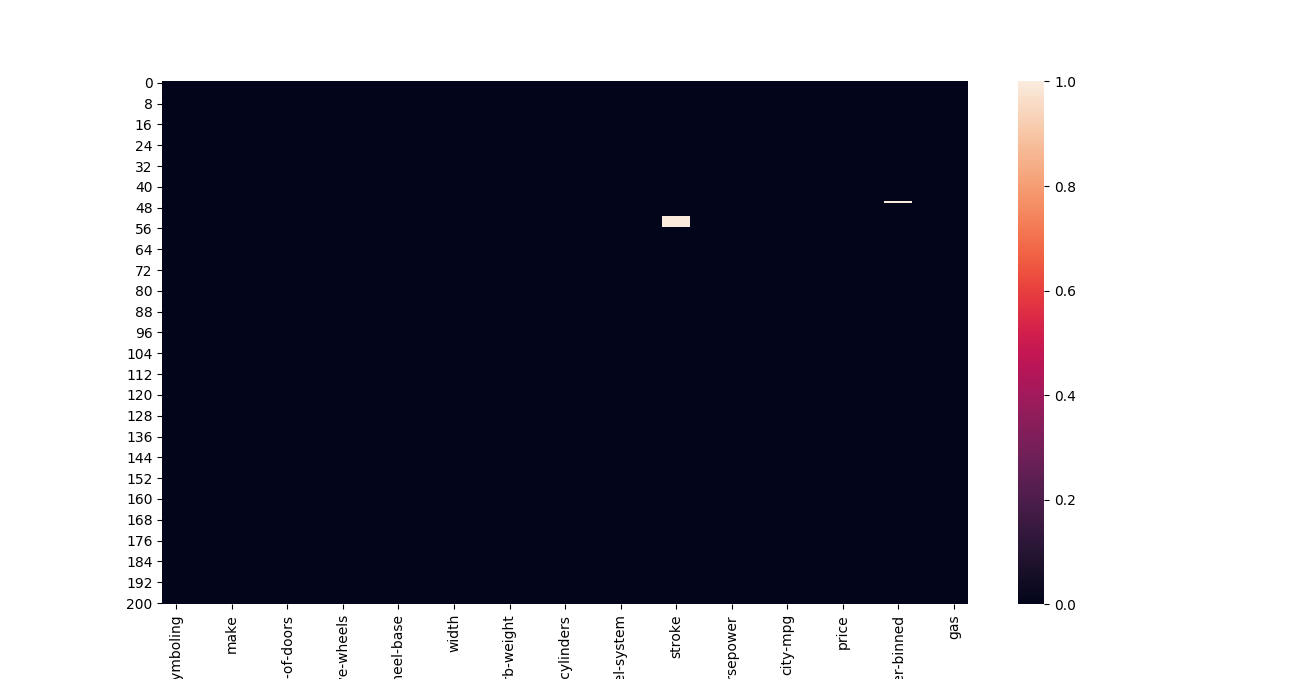 This indicates that “stroke” and “horsepower-binned” columns have few missing values.

We can handle missing values in many ways:

ANOVA is a statistical method which is used for figuring out the relation between different groups of categorical data. The ANOVA test, gives us two measures as result:

P value: It shows us the confidence degree. In other words, it tells us whether the obtained result is statistically significant or not.

Let’s take an example to understand this better.

So, we can say that there is very small variance between “audi” and “volvo” because their average price is almost same. While the variance between “jaguar” and “honda” is significantly high. Let’s verify this using the ANOVA method.

The ANOVA test can be performed using the f_oneway() method from Scipy library .

This gives us the following result:

The result confirms what we guessed at first. Since the variance between the price of “audi” and “volvo” is very small, we got a F-test score which is very small (around 0.01) and a p value around 0.9.

Let’s do this test once more between “jaguar” and “honda” and see the results.

This gives us the following result:

Correlation is a statistical metric for measuring to what extent different variables are interdependent.

In other words, when we look at two variables over time, if one variable changes, how does

this effect change in the other variable?

Another example would be the relationship between the number of hours a student studies and the score obtained by that student. Because, we expect the student who studies more to obtain higher marks in the exam.

We can see the correlation between different variables using the corr() function. Then we can plot a heatmap over this output to visualize the results. 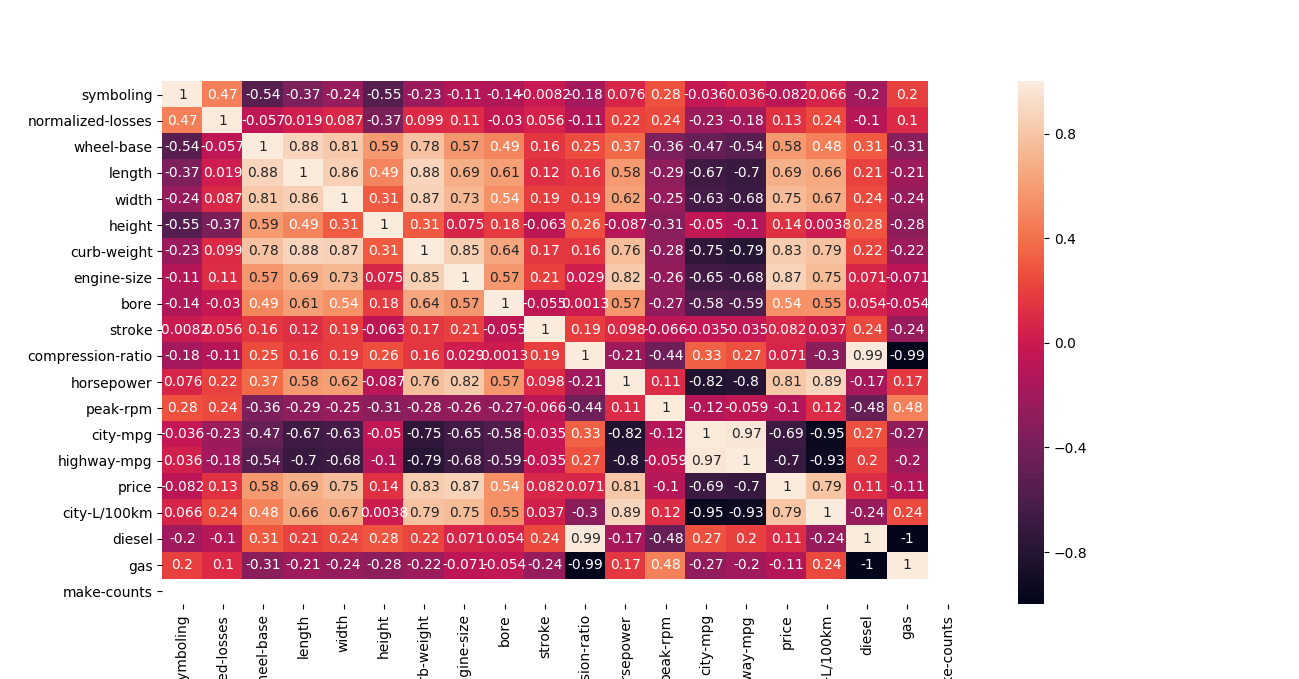 From the above heatmap, we can see that engine size and price are positively correlated(score of 0.87) with each other while, highway-mpg and price are negatively correlated(score of -0.7) with each other. In other words, it tells us that cars with larger engine sizes will be costlier than cars with small engine sizes. It also tells us that expensive cars generally have less MPG as compared to cheaper cars.

Let’s verify this relationship by plotting regression plots between these variables. 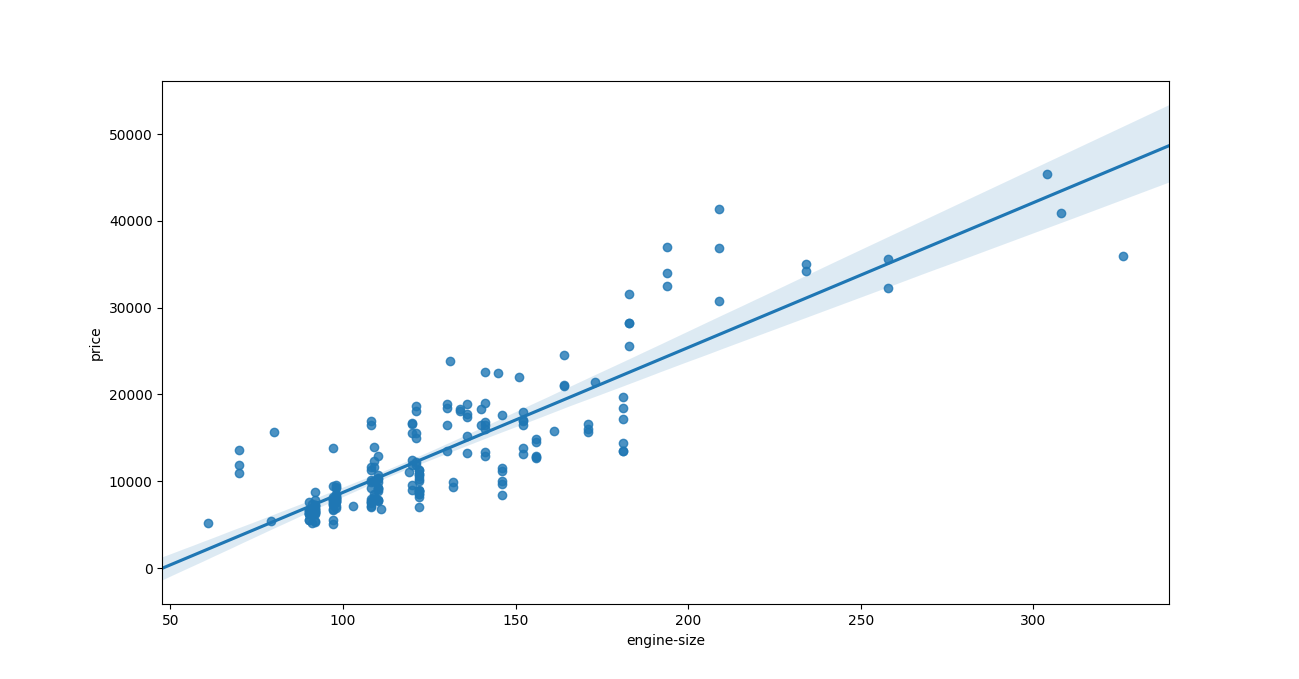 The above plot shows the positive correlation between engine size and price. 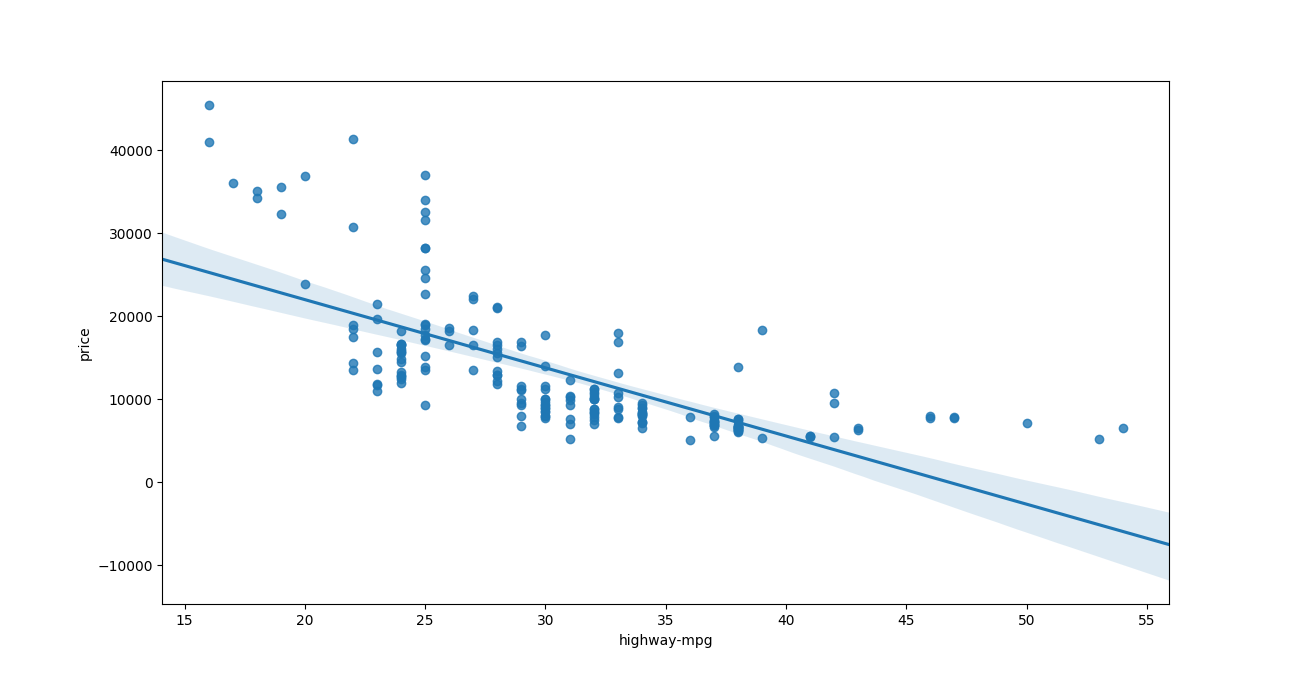 The above plot shows us the negative correlation between “highway-mpg” and “price”.

This was a brief introduction to Exploratory Data Analysis. Follow our publication to get regular updates on these kind of tutorials.

If you enjoyed reading this article, please have a look at our Introduction to Machine Learning course.